You are here: Home / Blog

” The Dr’s of Gestalt Performance, and the MACH 1 Baseball program were privileged to share the stage earlier this month with the members of the Arizona Diamondbacks medical staff and other leaders in the field.  The seminar was held in Peoria, Az at the San Diego Padres spring training facility.  The theme of the seminar was integrated movement strategies for the thrower.

Dr.’s Winchester and White presented and demonstrated on the assessment and treatment of the shoulder using DNS ( dynamic neuromuscular stabilization) correctives as well as the objectification of the thrower using technology and data and then knowing how to use that date to optimize performance. 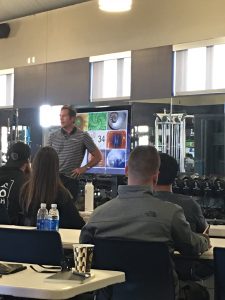 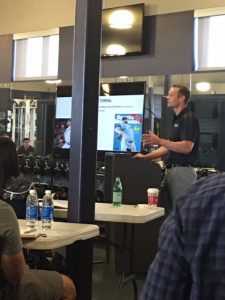 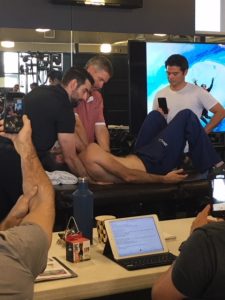 Testing, in and of itself, is a means to validate the effort our athletes are putting into their training, proper nutrition and recovery. But let’s take a deeper dive into each data point that we collect and why.

Anthropometrics– Height, Body Weight, Lean Body Mass- Total Body Weight not only lets us know how an athlete has changed from evaluation to evaluation, it is also a critical component of the Peak Power number that tells us if an athlete is getting more powerful as a result of adding mass and speed. For example, if an athlete gains 5 pounds, but their vertical jump remains the same, then they will have gained more Peak Power. If an athlete’s body weight remains the same, but their vertical increases by 3 inches, this athlete has also gained Peak Power. Power output is the name of the game in baseball- creating more power leads to enhanced velocity and bat speed. More on Peak Power later. 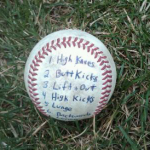 Lean Body Mass (LBM) is a number that we are hoping to increase for all our athletes that are going through puberty and testosterone levels have started to rise. Strength training will still help a younger athlete (prepubescent) because they will make neuro changes, basically increasing their ability to utilize dormant muscle fibers that they already have. Increasing lean body mass will lead to increased power if the training is right.

Moderate changes in body composition such as gaining weight when needed, shedding a few unwanted pounds and adding muscle all contributed to potentially creating a more powerful athlete. The best progress here is slow and steady changes over the course of an off-season.

Seated Medicine Ball Throw, Rotational Medicine ball throw right and left and vertical jump– this is where the evaluation gets really cool! Take your vertical jump in inches, it should be basically the same as your Seated Chest Pass in feet, if it isn’t within 5%, you have an upper body power issue. Your rotational medicine ball throw in feet should be 1.5x your vertical jump in inches. If it isn’t, we have to build in more transverse and frontal plane exercises focused on building power—think Medicine ball throws, lateral bounds, etc. We also look for big discrepancies in left-handed and right-handed throws- in a perfect world, a well-trained athlete with good neuromuscular coordination should be similar in distances thrown from each side.

At the end of the day we are tracking total body power output as represented by Peak Power. This number won’t mean much until we have a second testing and give you some goals to strive for. The average Peak Power of a high school player who was drafted into the pros is 10,342. Many of our athletes are too young to produce this much power yet, but it is a good number to understand for the next 304 years of training. We are looking for ways to improve power through more coordinated and efficient movements which are created by repetition and drill refinement; mobility and stability enhancement; and proper recovery (nutrition, sleep and active recovery).

Testing is not an exact science, more like a barometer of progress over time. Athletes all grow and mature at different paces, so testing is really only for the individual to show progress. My goal is to create Long-Term Athletic Development (LTAD) which means we want our athletes to enjoy the process as much as the fruits of their labor. Learning to love exercise and forming the habit of consistent exercise is incredibly important and we hope we are inspiring you to get your workouts done with a focus and effort necessary to reach your goals while having FUN doing so.

Now get after it! Dale

This year’s World Series reminds Coach Whiteside of a lesson he learned from a Hall-of-Fame pitcher.

What a thriller of a  World Series, let’s talk about what we can learn. There have been no shortage of story lines, heroes, and second-guessing—stuff for the broadcasters to chatter about. For youth baseball players and coaches, it’s worth taking a look at the battles fought, especially those fought by pitchers and hitters.

To the naked eye, an at-bat during the World Series might look no different from the thousands of at-bats taken by hitters during the regular season. The hitter steps up to the plate, the pitcher toes the rubber, the catcher flashes the sign. The ball is thrown and the bat is swung. Sounds familiar, right? But in a seven-game series, with the weight of tradition that comes with the World Series, there’s no such thing as a typical at-bat for Big League hitters—or for the pitchers they face.

When I was with the Braves in 2001, I was in the 10th year of my career. But I didn’t feel like a veteran. I still had a rookie’s awe and admiration for the Braves pitching staff—Tom Glavine, John Smoltz, and Greg Maddux, to name a few. One game stands out. We were in New York to face the Yankees and Maddux was on the mound. In the middle of the 7th, our manager, Bobby Cox, pulled him out. I didn’t get it. Maddux’s team had the lead, and his pitch count was where it should have been. Why pull him now?

Later, waiting in the hotel lobby for the rest of the dinner party to arrive, I had the chance to ask Greg Maddux about the game. I asked if he was frustrated to be taken out with a lead and a low pitch count.

This confused me. There had been no mound visit.

He went on to explain that he and his manager had agreed Maddux would only be pulled when he, Maddux, gave “the sign.” The sign itself was a simple hand gesture that no one would notice except the person it was meant for—Bobby Cox. Otherwise, Maddux would stay in the game. They had earned that level of respect from each other.

But that didn’t exactly answer my question. Why had Maddux taken himself out of the game?

Maddux explained he had three ways he could beat a hitter.

If I knew I had one way to get a guy out, I was ecstatic. Maddux had three approaches per hitter, including a No-Doubter—a ‘Trump Card,’ as he called it, to be used only late in the game. If a situation came up during the game where Maddux needed to deploy #3 earlier than he expected, he would give the sign. He’d take himself out of the game, rather than face a hitter without a plan for the out. For the team’s sake, and to honor the respect he and his manager shared, Maddux would not stay in the game if he thought he couldn’t execute.

• Starter vs Lineup first time through the lineup

• Starter being asked to pitch on multiple days outside the rotation

• Missing pitch spots—>Walks will always kill you, but never more than during the playoffs ( Gm 5 of this series had 25 runs scored, 10 of which were from a walk or hit batter)

• Pitchers vs. Hitter—>Does he throw his best pitch, or does he pitch to the hitter’s weakness, even though the hitters weakness may not be the pitcher’s strength?

• Reliever who is pitching on fumes, but wants the ball, and gets the ball, but realizes too late he doesn’t have his best stuff

• Closer who is mentally defeated after blowing a save (Giles)

• Hitter getting beat with fastballs uses a shorter and lighter bat during 3rd AB (Turner, Game 1)

Pitchers face hitters over and over, and in situations where approaches that work in the regular season might not make sense. Think about the hours of preparation. Think about Maddux’s mental toughness and discipline. Think about the dozens of small adjustments made during the game by both hitters and pitchers to give their team the better chance of winning. And most importantly, remember that execution is what counts.

Last week we discussed the importance of Building a Powerful Base and one of the lifts, the Trap Bar Dead lift, we like to use. Mechanically speaking, a strong, stable, and powerful base is the foundation that a pitcher uses for his primary power source. Lower half strength/power, coordinated with proper sequencing, creates an efficient delivery that generates useful velocity.

Once the Power is generated it must be transmitted up through the kinetic chain. If the foundation is not stable and strong there will be energy leaks, hence a loss of power and velocity. 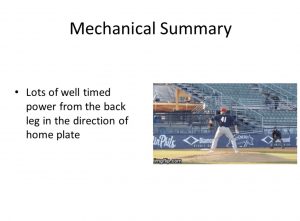 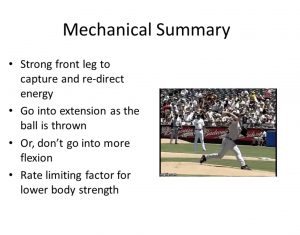 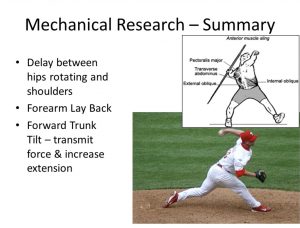 Let us know if we can be of help, and thanks for reading!

Building a stronger base to ward off injury and throw with more velocity is one of the cornerstone philosophies of the Mach 1 program.

In the next two months of programming we will be introducing  several compound lifts that will help you gain leg strength. This newfound strength will convert to additional power out of the ground or off the mound. Consider this, your body channels energy created out the ground; through your legs and core; out to your upper extremity; and then transfers the energy out through the baseball. This is why working large muscles in a multi-joint fashion makes a lot of sense.   We are not only training about 90% of the muscles in your body with this first lift we are introducing, but we are also hoping to enhance your neuromuscular awareness. Essentially, helping you sequence your muscle contractions to make a more consistent, fluid movement that produces more force.

Your goal is to safely learn these exercises following the cues below, watching the video and interacting with your strength coaches. In addition, if you have a teammate or Mach 1 client that is more experienced in this lift, train with them.   Just like pitching requires a lot of mechanical training, so does performing these more compound movements- so utilize your resources whenever you can.

Here is a link to the video off how to do the Trap Bar Deadlift:

Here is Bryce Harper lifting 500 lbs. While impressive, his form is less than desirable and an example of poor lumbar positioning during the lift. You should maintain a neutral or slightly extended lumbar spine, but not go into lumbar flexion as demonstrated here. This weight is too heavy for him to have good mechanics. Be aggressive, but be smart!

1) “Know your foot placement”- Keep your feet under your shoulders when setting up.

2) “Squeeze shoulder blades”- Squeeze them together as if you were holding a pencil between them.

3)”Keep your chest up”- Show me the logo on your chest at all time throughout the lift.

4) “Do not tuck your chin”- Keep a neutral neck posture- chin should be level with the floor at the top of the lift.

5) “Don’t just jerk and lift the weight”- Think about putting force into the ground by driving your heel into the floor.

6) “Pull your hips through”- Drive your hips forward contracting your butt muscles (Gluteus Maximus) at the top of the lift.

7) “Do not over extend at the lower back”- Don’t arch your back when pulling your hips through.